Ground has been broken on the new Environmental Education Center in Winnebago County. On Monday afternoon, after more than four years of planning and fundraising, construction will soon begin on the Winnebago County Conservation Board’s new center The WCCB held its second bid letting on June 14th, approved Kingland Construction Services’ bid at its June board meeting and signed the final bid contract at its July meeting. 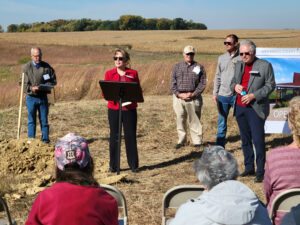 The concept of a center actually goes back further than that according to Winnebago County Conservation Board Director Robert Schwartz.

According to Schwartz, the groundbreaking was made possible through donations coming in from the public and various grants, but there is still more to raise so that the center is completely paid for.

The center is located nearly in between Forest City, Lake Mills, and Buffalo Center. Due to that proximity, Schwartz is hoping that area groups will use the facility for more than just learning about nature.

The center will also be more accessible than Thorpe Park in the winter and spring rain season due to its highway location. Schwartz stated that there will still be activities held in Thorpe Park like the canoe float among others.

Worth County Board Moves Forward on Soil Evaluation Studies