A painstaking process of counting individual ballots in order to affirm machine tabulator results took place on Tuesday afternoon in the Winnebago County Supervisors Chamber of the courthouse. The audit was in response to a call from Iowa Secretary of State Paul Pate who asked for specific races to be audited.

Winnebago County Elections Commissioner Karla Weiss had to assemble an election auditing board which would be impartial and fair. She chose two Democrats and one Republican to sit on the board.

According to Weiss, because there has been so much deliberation on the accuracy of the election results in recent years, the election audit has taken on a new twist.

To be absolutely sure that there is accuracy, the audit of a precinct is never announced until after the election is completed.

The audit featured 281 ballots from the chosen precinct. The first audit was on the race for Governor. Kim Reynolds received 226 votes in both the tabulator machine votes and, on the hand counted ones. Deidre DeJear got 48 votes on both counts and Rick Stewart received identical 7 votes cast. 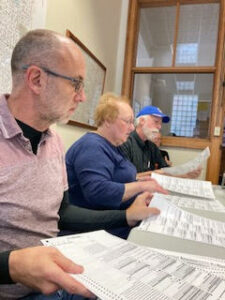 The audit begins with all three election auditors individually counting each ballot in the precinct. This means that each auditor must count every ballot so that it matches the number collected from the precinct.

If there is a discrepancy, the audit cannot continue until all ballots are accounted for. In this case, all 281 ballots were present and the auditing of the races in question could begin.

This is only the beginning of the tedious process. Now receipt tape from the tabulator machines are used to match the number of ballots that were sealed up in a bag on election night. That bag has not been opened until the election auditors do so to check the results.

Once the ballots are completely accounted for, they must never leave the large table where the auditing is being done. 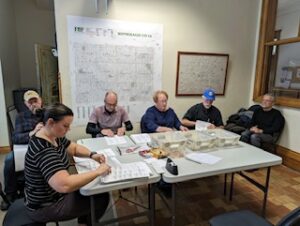 The results are then compared to the machine tallies for accuracy and in this case, there were no discrepancies in the vote tallies for each candidate. 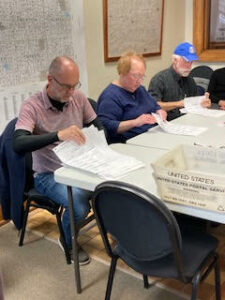 Again, the ballots are collected together, and the same process is used to audit the next ballot question which is the Constitutional Amendment to keep and bear arms. “Yes” votes on the question are separated from the “No” votes. Those that are blank are put into a separate pile.

Weiss stated that the tabulator machines have always been accurate when audited by the auditing board at her location. The random auditing process is expected to remain the same for future elections.