Forest City was the heavy favorite in the boys’ team race, while the Indians held an edge over Bishop Garrigan in the girls’ race coming in – and the Indians performed in front of their home crowd.

Sopko (left) was named TIC coach of the year.

Lili Nelson (right) from Forest City was named TIC athlete of the year. 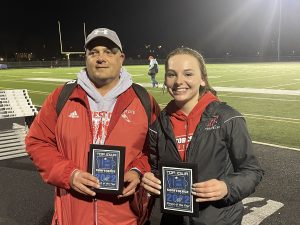 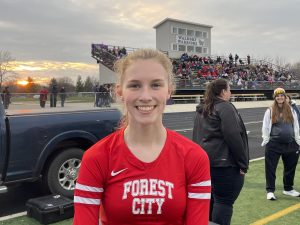 Forest City freshman Bethany Warren has been an instant star in her first year. Warren broke the conference meet record in one of the most grueling events – 400m Hurdles in a time of 108.55.

Senior Shae Dillavou came in third-best in the high jump with a season-best of 5’1″. She cleared that on her 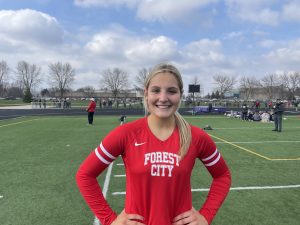 The Forest City boys came into the night with the expectation of winning the conference title – by a lot – and they did just that. Forest City won by 69 points and really didn’t have to worry all night long.

Hovenga was also named the TIC boys coach of the year, while Belmond-Klemme’s Tate Sander was named the male athlete of the year by the conference coaches. 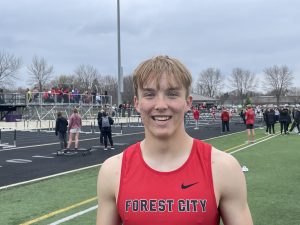 The Indians nearly had a new school record for the second time this year, but sophomore Dakota Carlson came up just short of it. Carlson eased to the conference title in the high jump event with his new career-high of 6’5″ – the same height that’s stumped him throughout the year.

A bright spot for Lake Mills was senior Wyatt Helming. The big man – who will play basketball at Northwestern College next year – came in hoping to win the discus; he did that. But he also muscled his way to the shot put title as well. His throw of 43-9.50 was his personal best and enough to beat the competition. 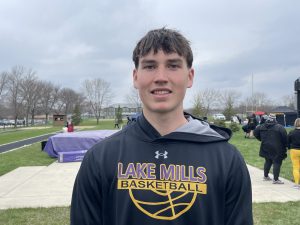 The West Hancock shuttle hurdle team finished fifth at last year’s state meet. They just nearly missed going to the Drake Relays, which Mitchell Smith said was disappointing, but they are focused on state. They won the conference championship in 102.83.

The full meets results can be found here.