The Iowa Department of Natural Resources says elk sightings are becoming more common in Iowa as the number of trail and outdoor cameras has increased. The DNR’s Tyler Harms says the source of the elk is not as certain as it used to be. 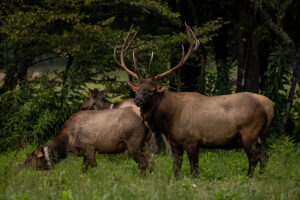 But he says the wildlife bureau has started to collect tissue and fecal samples from the animals to conduct some genetic analysis to determine where they might be coming from. An elk was hit and killed on I-80 this fall and another was found dead within sight of Highway 20, east of Sioux City. The Woodbury County elk was a 1 to 1-1/2-year-old adolescent animal weighing approximately 450-500 pounds. Harms says the size is the key thing that makes them different from deer.

Elk were native to Iowa, but left as the state was settled. Harms says there isn’t a concern the elk will cause issues with the deer population.

Though sightings are up in the fall, elk numbers are still low in Iowa, and multiple sightings are likely due to one animal traveling a great distance. Harms says there’s one thing to do if you see an elk.

Harms says there are some rare cases when an elk may damage fences or create other issues.

Elk and moose are protected in Iowa Code and you can be fined for illegally killing them.