The odds of most Iowans having a white Christmas are increasing by the minute. While the holiday is still just days away, the snow falling across much of the state today will be followed by very cold weather, so whatever falls now will likely stick around at least until December 25th. Meteorologist Jim Lee, at the National Weather Service, says the expected snow accumulation amounts vary across the state. 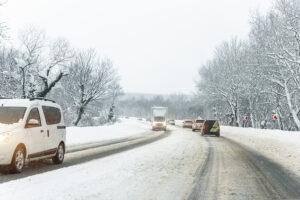 Snow events may be declared in several locations throughout the area where city officials will ask residents to move their cars off of the streets in order to remove the snow.

Those who intend to travel for the holiday also might be making some changes. Winnebago and Hancock County Emergency Manager Andy Buffington is cautioning everyone to have an emergency kit in their vehicle.

The kit should include a number of items according to Buffington.

A Winter Storm Warning is in effect for the entire broadcast area. A Blizzard Warning has been issued after 12pm on Thursday. The National Weather Service has also issued a Wind Chill Warning for counties west of Spencer and Storm Lake and all parts of Minnesota. Snows began to fall in the area on Wednesday along with strong winds, but that is not the worst of it. Meteorologist Alan Curtis with the National Weather Service laid out the storm track.

The strong winds will remain through Saturday according to Curtis, making travel difficult through most of Christmas Eve.