The Trumpeter Swan is one of Iowa’s great conservation success stories. This native species was extirpated from the state in the 1800s due to wetland habitat loss and unregulated harvesting and the species remained absent for over 100 years. The Iowa DNR started a captive breeding and reintroduction program in 1994 which has successfully re-established a population of Trumpeter Swans in the state. The initial goal of the reintroduction was to establish 15 breeding pairs. This goal was first met in 2004 and the breeding population has slowly increased ever since. The DNR tracks the number of nesting attempts each summer in order to quantify a population trend. The results for 2022 confirm an increasing population with a record 135 Trumpeter Swan nesting attempts across the state. 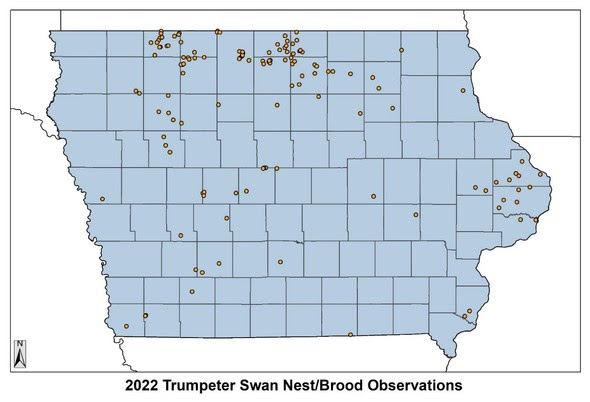 DNR and other natural resource professionals and private citizens reported observations of Trumpeter Swan nest attempts during May-September 2022. Additional information on nest success, number of cygnets hatched, and number fledged was recorded when available. Reports were evaluated to remove any duplicates that may have occurred.

A total of 135 Trumpeter Swan nest attempts were reported in 2022, a 13% increase from the 119 nests reported during the last count in 2020 (figure 2). Nests were distributed across 41 counties (Table 1), an 11% increase over the 37 counties where nests were reported in 2020. Kossuth and Dickinson counties had the highest number of nest attempts (15) followed by, Cerro Gordo and Palo Alto (9), Worth and Winnebago (8), Hancock (7), and Jackson (6). The remaining 33 counties had five or fewer nest attempts each. There were five counties that reported nest attempts in 2020 but did not report nest attempts in 2022. This may represent biological reality in some cases (e.g., territory abandonment) but may also be the result of inconsistent observation effort and reporting.