The Biden administration is pursuing a nuclear agreement with Iran. This has led to some grave concerns by many in Congress on both sides of the aisle as whether this is a good idea. U.S. Senator Joni Ernst, combat veteran and member of the Senate Armed Services Committee met with reporters to emphasize the potential dangers involved with this process.

Ernst is working with fellow veteran, Representative Mike Waltz, on an effort to enforce U.S. sanctions on Iran until the Secretary of State certifies to Congress that Iran has not supported any attempt or activity to kill a U.S. citizen, a former or current U.S. official, or an Iranian living within the United States. 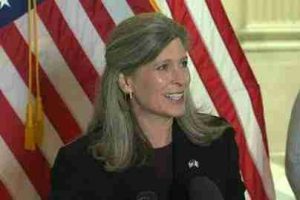 The PUNISH Act, or Preventing Underhanded and Nefarious Iranian Supported Homicides Act, would codify the Trump administration’s “maximum pressure” sanctions on Iranian government officials, its financial sector, and other sectors including Iran’s energy industry. It would also prohibit the lifting of sanctions on Iran, including those that President Biden wants to lift to re-enter the Joint Comprehensive Plan of Action – the Iran Nuclear Agreement – until the State Department can certify no assassination attempts or bounties are placed on current or former senior government officials for five years.

Representative Mike Waltz also spoke about the situation and the PUNISH ACT.