FOREST CITY, Iowa – For the first time in school history, the Waldorf volleyball team is 7-0. The Warriors’ milestone was hit when they reached 5-0 after their first two games last Friday at William Penn, but the Warriors didn’t stop. The second day of the Jimmy John’s Classic on Saturday was a bit tougher, but the outcome was the same – two Waldorf victories.

So what happened between last year’s team that started 3-4 and this year’s 7-0 team? Graduated some seniors and changed the foundation of the team? No. Actually, when looking at their personal, little changed. Sixth-year head coach Bri Ebenhoe says the team’s mindset changed. “Ultimately, it was when we sat down and said what are your goals, what team do you want to be, what team do you want to be in November,” Ebenhoe said. She laid out in front of the team what they needed to do to achieve the things they wanted. “They’ve responded well,” she added.

Ebenhoe raved about how the team pushes each other, saying “compete” is the team’s theme this year. That was backed up by junior captain Kenzie Kidd from Roscoe, IL, “honesty is one of our pillars this year. It wasn’t the skill that was holding us back, it was being able to talk to each other – being open and honest with everyone”, said Kidd. “This team isn’t any different, but the way we approach each other is. Everyone is trying to take each other’s spot but in the most loving way possible”, Kidd continued by saying. “They love beating up on each other,” said coach Ebenhoe.

In the early season, Kidd is again shaping up as one of Waldorf’s main offense threats. She leads the team averaging over three kills per set but has also collected 64 digs. Kidd, along with seniors Kaitlyn Bakke and Abygail Wood, are the Warriors’ captains elected by their peers. “Personally, it meant a lot to me being nominated and voted on by my teammates is an honor, “ said Bakke, the team’s setter. Bakke’s position on the court is a leadership position by itself. She is the floor general, the one who directs the attack. Though, Bakke feels you have to have different leadership qualities to be an on-court leader and an off-court leader. “To be able to run the offense effectively is a very big deal,” she said.

One of the team’s eldest members is Abygail Wood from Ankeny, Iowa. Wood, a middle blocker, has collected 23 blocks this season and has also racked up 50 kills which are third best on the team. “We’ve had a really good approach to the season,” Wood says. “We’ve all really clicked because we’ve all played really well together for a while,” she added. 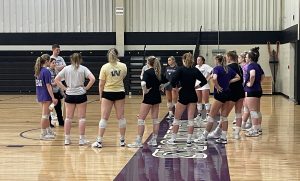 As previously stated, no, the foundation of the Warriors hasn’t changed, but the team isn’t entirely the same as last year. They have added pieces, five of them to be factual, and Wood says those players are buying into what she and the other seniors have worked to build the past four years, “They’ve all come in and clicked very well with us, it’s an awesome start, but we aren’t done yet – this is just the start.” Bakke added, “We focus a lot as a team on culture, bringing those girls into what we’ve been building, and making sure they’re comfortable in our culture and their roles.

Ebenhoe’s program is unique; she means it when she preaches a family atmosphere. Her assistant coach isn’t just her right hand on the volleyball court, but he’s also her husband. Matt, a native of Milwaukee, WI, was a member of the track and field team at the University of Wisconsin-La Crosse. He has been the assistant for the Warriors since he and Bri arrived in Forest City over half a decade ago. When the pair came, they wanted a team that was competitive, hardworking, responsible, disciplined, and accountable, and Ebenhoe believes they’ve finally arrived at that point. “This group has decided they’re all in wanting to be better, and the results are speaking for themselves,” coach Bri Ebenhoe said. “It’s not easy to be a member of this program, it’s not easy to be a college athlete because we have such high standards on and off the court, but if you have the right people around you, it’s certainly a lot more fun,” she also added. The team’s family connection runs deeper. Kidd has her twin sister, Kaylee, by her side on the team. Kaylee is the team’s libero and has started the season with an incredible 117 digs. The junior defensive player has never seen a ball she doesn’t feel can’t be saved, and sometimes a saved point here and there can be the difference in a set or match.

Expectations were low coming into this season from those outside of the program. After going 11-16 overall and just 2-12 in the North Star Athletic Association, the conference coaches picked Waldorf to finish seventh of the eight teams in the league. They predicted the Warriors would again miss the conference tournament as only six teams are invited to compete. On the other hand, the expectations inside the program are higher than ever. Waldorf expects itself to compete with the best teams in the conference. That means they’ll have to compete with the best teams in the country. Two NSAA teams are nationally ranked, #3 Bellevue and #9 Viterbo, and Dakota State has been receiving votes.

The Warriors will get that opportunity next week. Waldorf will play two more tune-up games this weekend at Iowa Wesleyan against Wesleyan and Saint-Mary-of-the-woods college before they come home Wednesday to open the conference season against #9 Viterbo University at the Hanson Fieldhouse. The match is slated to start at 7:00 PM.

Oh, and think the Warriors don’t care when their teammates make a good play even if it didn’t include them or if they’re on the bench? Just watch them celebrate each other after those plays. It’ll hype you up from your seat or computer screen and speaks volumes to those on the outside about just how strong the love for each other runs inside the program.

Zarren Egesdal is the sports director for Coloff Media radio stations KIOW and KHAM. He can be reached daily at zarren@coloffmedia.com or 641-585-1073. Do you have a story idea? Feel free to contact him. Zarren is an award-winning journalist providing coverage to all area schools. Throughout the year, you will hear Zarren calling games as the ‘voice of the Forest City Indians’ on KIOW (107.3), the Indians’ flagship station.