After nearly 15 years in business, Uptown Fitness owners Heather Yeoman and Rachel Olson have decided to step down and sell the business.
“I’m looking forward to decision making and also continuing to build the studio through the classes and the boutique,” Anna Stene stated, who purchased Uptown Fitness with her husband. Despite the transaction, Yeoman and Olson will remain on the studio’s administration team and continue instructing classes.
“Owning something on Main Street that’s giving back to the community is such an amazing feeling, but that’s not going away,” said Yeoman. 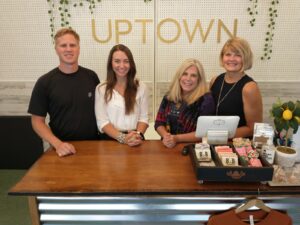 Stene joined Uptown Fitness as a member when she moved to Lake Mills in 2017 and became a yoga instructor in 2020. She became more involved throughout her time at the studio, making her a prime candidate for taking over as Yeoman and Olson prepared to step back.
Yeoman participated in jazzercise for most of her life and started teaching classes at the Lake Mills Family Fitness Center when she moved to town in 2007. As the class quickly gained traction, Yeoman founded Uptown Fitness and rented the former American Legion. The business continued to expand in customers, classes and instructors throughout the next 10 years.
In 2020, Yeoman and Olson decided to purchase the studio’s current space; they did not know that the day after, the state of Iowa would shut down all gyms due to the COVID outbreak. The team quickly acted by moving classes online.
Yeoman said, “We had instructors teaching classes from their kitchen.” 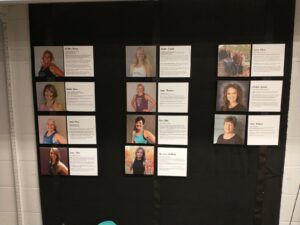 In the meantime, Yeoman and Olson spent countless nights and days renovating their new studio, such as painting, re-flooring and building designated fitness rooms/spaces Uptown Fitness has eight instructors that meet regularly to stay up to date with each other and what is happening at the business. They also try to attend each other’s classes for support. Stene explained that this helps strengthen the sense of community in the studio.
“Heather always says that we sell relationships first and fitness second,” said Olson.
Now, Uptown Fitness offers in-person and online memberships and offers a variety of classes, including yoga (vinyasa and gentle), jazzercise (dance mixx, flip fusion and strength 45), cycling, muay thai, barre, circuit blast, LIIT and sculpt and stretch. The studio also offers specialty classes throughout the month.

To become a member, visit www.uptownfitnesslm.com.
“Joining the studio was a big part of me becoming a part of the community, so I’m excited to
keep giving back,” said Stene.

Sunday Talk: Feenstra on This Past Week

Wright County Board to Discuss Increasing its Size