ADA Enterprises Inc. in Northwood is proof that small-town businesses can succeed and conduct business worldwide, including in Canada, Europe and Saudi Arabia.

ADA started in 1974 in Minnesota as an animal flooring manufacturer and later purchased Premier Polysteel to manufacture playground equipment and outdoor furniture in 1998. Finally, in 2006, ADA bought Ridglan Animal Care Systems to work in veterinarian and research animal flooring. The company receives all materials from within the United States.
“Even though they are three different industries, they are all made the same way,” explained Beth Buehrer, director of human resources. “All made in-house, fabricated, welded, coated and shipped from in-house.” 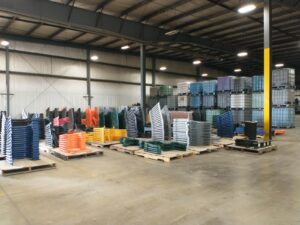 ADA is family-owned and takes pride in its customer service. According to Buehrer, the company can always be reached during the day, and a caller will reach ADA’s voicemail. Buehrer believes the company’s work culture is unique compared to other businesses, particularly in manufacturing, because each employee, whether from the office or on the floor, “plays an equal role.”
She credits much of ADA’s success to the employees and the business’ morale. According to Buehrer, ADA prioritizes employee happiness which can be seen through giving weekends off, profit-sharing opportunities and fast-acting benefits, as well as providing fans, water, treats and fulfilling whatever other requests they have.

“Everything that they do is as important as what he (President Tom Stensrud) is doing, or we wouldn’t have a position for them, so everybody’s opinions matter,” Buehrer said. 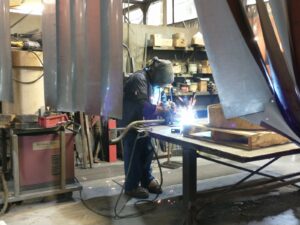 Within the last few years, ADA underwent an expansion that doubled its size to allow for more storage and smoother product production. The business expanded even larger than necessary for the time so they could continue to grow in the future. Five years later, the company is already discussing plans for its next expansion and is adding an evening shift to keep up with production demands.
“Coming to Northwood was a no-brainer for the business,” said Buehrer.