A family of soapbox race fans from Mason City will use their upcoming international exposure to shine a light on Mason City’s musical heritage. Five family members: Scotty Anderson, Jaylin Anderson, Madison Anderson, David Westendorf & Kaylyn Westendorf will compete in the Red Bull Soapbox Race on June 18, 2022 in Des Moines, Iowa. The family of five was one of 50 teams selected to participate in the highly competitive application process. 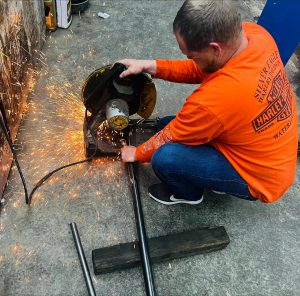 “We have been watching the Red Bull Soapbox races for years. We couldn’t believe it when we saw that they were headed to the Midwest! Once we realized that they created an event in Des Moines, we knew we had to apply. We just didn’t think we would make it. But, we couldn’t be more thrilled at the opportunity to compete in this once in a lifetime event,” said Jaylin Anderson.
The Red Bull Soapbox Race is a race competition in which amateur teams see who can navigate their homemade cart the fastest through a downhill course, filled with obstacles and potential crashes, in front of a crowd of tens-of-thousands. Although the thrills and spills of the race can generate the crowds’ biggest roars, the event is fueled by more than just the need for speed. Teams are judged on a criterion of one-third speed, one-third creativity, and one-third showmanship. So, in addition to building the quickest cart, teams will also need to impress the
judges and crowd by how outrageous and charismatic they can be. The Mason City team chose “Trouble in River City” as their team name, taking inspiration from “The Music Man,” a hit Broadway musical composed by Mason City native Meredith Willson. They’ll build their homemade cart ‘Weapon of Brass Destruction’ to resemble a trombone.

“In looking at all the opportunities that are out there for cart designs, we knew we wanted to do something unique to stand out. This year’s race has a hometown pride component to the competition, so we thought we would focus on that and go with a theme representing our town’s heritage,” Anderson said.
Visit Mason City and The Music Man Square have partnered together to support the ’Trouble in
River City’ team.
“This is an amazing opportunity for The Music Man Square to support our community on such a large stage. That is what we are here for,” said Nick Whitehurst, Executive Director of The Music Man Square.
According to Anderson, Red Bull executives said they selected the team because they found their story fascinating. “Trouble in River City” will be one of the only teams to compete with three female crew members or “pushers.” 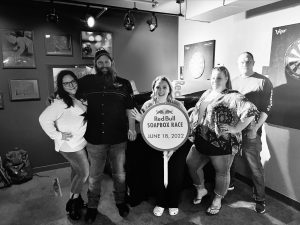 “We knew that we wouldn’t want to experience this with anyone else so that is how our team came to be,” said Anderson. “We’d like to say we are full of girl power! We may not be the strongest, but we add the creativity aspect to the team and hopefully our team has just the right ingredients to bring home the trophy.”
A “People’s Choice Award” will also be presented to the team that receives the most votes. Fans can cast one vote per day from June 10-17, 2022 on Red Bull’s website.
“We want the community’s support when we compete and hopefully, we will make Mason City proud,” Anderson said.

Since the first race in Brussels in 2000, over 100 Red Bull Soapbox events have been held in places like Los Angeles, Hong Kong and Sydney, Australia. This is the first time the event has come to Iowa. At least 45,000 people are expected to attend this internationally televised event on State Capital Grounds. 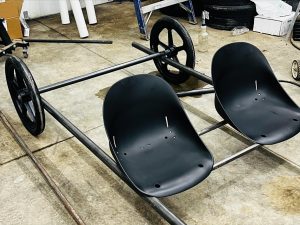 “This is an incredible opportunity to shine a spotlight on our state and our community to audiences around the world,” said Lindsey James, Executive Director of Visit Mason City. “This team is passionate about racing and proud of where they come from. We’re excited to be part of that. We invite everyone throughout Mason City and North Iowa to rally with us and cheer them on.”
Red Bull Soapbox Race Iowa’s course will run the length of East Walnut Street, alongside the State Capitol Complex, from E 12th Street to E 7th Street. Viewing is free and open to the public.