by U. S. 4th District Representative Randy Feenstra
DEMANDING ANSWERS FROM THE BIG FOUR MEAT PACKERS OVER THEIR PRICE-FIXING SCHEMES
On Wednesday, I participated in a House Agriculture Committee hearing on the American cattle market. During my remarks, I criticized the Big Four Meat Packers – which dominate more than 80% of the beef market – over their price-fixing schemes and anticompetitive behavior that are severely impacting Iowa’s small, independent cattle producers.
The cattle market needs reform now. Iowa’s independent producers deserve a level playing field. That’s why I am planning to introduce legislation in the House to bring transparency and accountability back to our cattle markets.
It’s time for the Big Packers to play by the rules that were set long ago. Efficiency is not an excuse for exploitation.
EXPEDITING MILITARY AID TO UKRAINE
Last night, I voted for and the House of Representatives passed by a vote of 417 to 10 the Ukraine Democracy Defense Lend-Lease Act, which is bipartisan legislation that expedites the delivery of military equipment to Ukraine.
It is critical that we provide Ukraine with the military equipment and weapons that they need to fight for their freedom. By utilizing lend-lease agreements like we did during World War II, we can expedite military support to the brave people of Ukraine.
I stand with freedom-loving Ukrainians and against Vladimir Putin’s despicable invasion of Ukraine.
SEIZING AND SELLING RUSSIAN OLIGARCH ASSETS TO FUND UKRAINIAN RECOVERY
On Wednesday night, I also supported bipartisan legislation – the Asset Seizure for Ukraine Reconstruction Act – that encourages the seizure and sale of Russian oligarchs’ ill-begotten assets to fund Ukraine’s recovery amid Putin’s continued onslaught.
Putin’s unprovoked war in Ukraine has caused untold suffering, and must be met with American strength and leadership. By confiscating and selling these lucrative assets, we can begin to fund Ukraine’s recovery and support the innocent people who have lost everything in just a few short months. 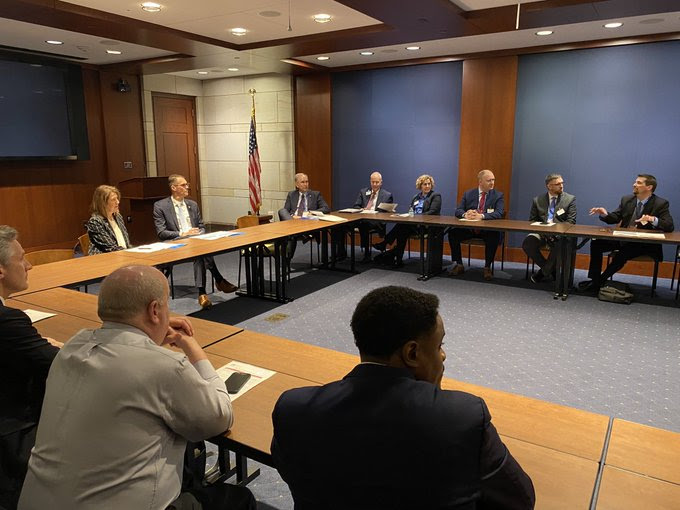 MEETING WITH THE IOWA HOSPITAL ASSOCIATION
On Tuesday, Congresswoman Cindy Axne, Congresswoman Mariannette Miller-Meeks, and I met with the Iowa Hospital Association to discuss how we can strengthen our hospitals and healthcare workforce in Iowa.
We talked about the need to recruit and retain healthcare staff, prioritize brain health, and help our hospitals in the 4th District best serve Iowans and our rural communities.
TALKING TO STUDENTS AND LEADERSHIP FROM THE UNIVERSITY OF NORTHERN IOWA
Earlier this week, I had the opportunity to sit down with President Mark Nook from the University of Northern Iowa.
In my meeting with President Nook, we discussed UNI’s education initiatives, economic development goals, and defense manufacturing capabilities for the security of our nation.
I also met with members of UNI’s student government. We had an informative conversation about their education at UNI and the issues that matter most to them and their fellow classmates.
MEETING WITH MEDICAL STUDENTS FROM DES MOINES UNIVERSITY
On Wednesday, I met with the American Osteopathic Association and medical students from Des Moines University to discuss the need to keep doctors in rural America and lower tuition costs for students.
I’m thankful for our healthcare workers and their dedication to caring for our families and communities in Iowa.
IN CASE YOU MISSED IT: U.S. GDP SHRINKS BY 1.4%!
This week, U.S. GDP – a comprehensive measure of American economic activity – shrunk by 1.4%, which is the worst decline in two years.
Unfortunately, wasting trillions of dollars on liberal priorities is fueling inflation, raising gas prices, and making every American’s paycheck worth less. Conservative policies will grow our economy and create good jobs.