It was also senior night for the four Forest City seniors.

Lake Mills Ella Stene finished top-4 in Class 1A at last year’s state meet in the 100M hurdles. Due to weather, she hasn’t run it much this year and is getting back into championship form.

Bishop Garrigan won the Al Gilbertson 4×400 award. The trophy is given out to the fastest relay team no matter what class and this year’s winning team included Emma Grandgenett, Molly Joyce, Abbi Capesius, and Zoe Montag. Garrigan last won the award in 2005, and it’s now been won by a small school for the last two years. (Pictured) 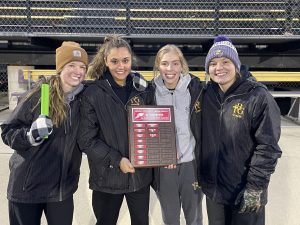