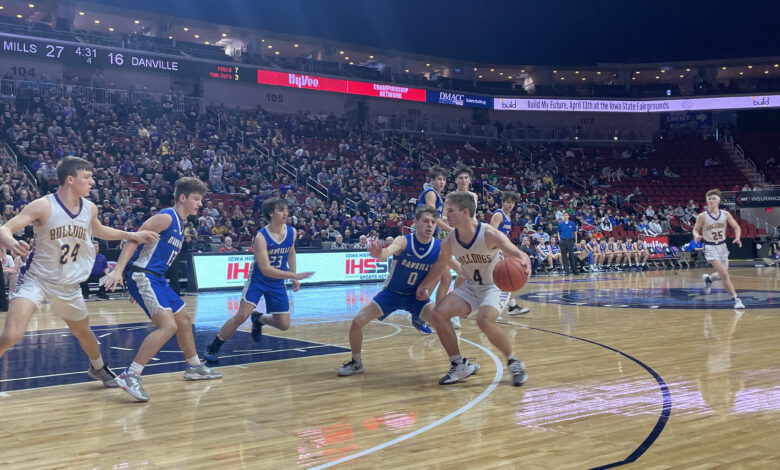 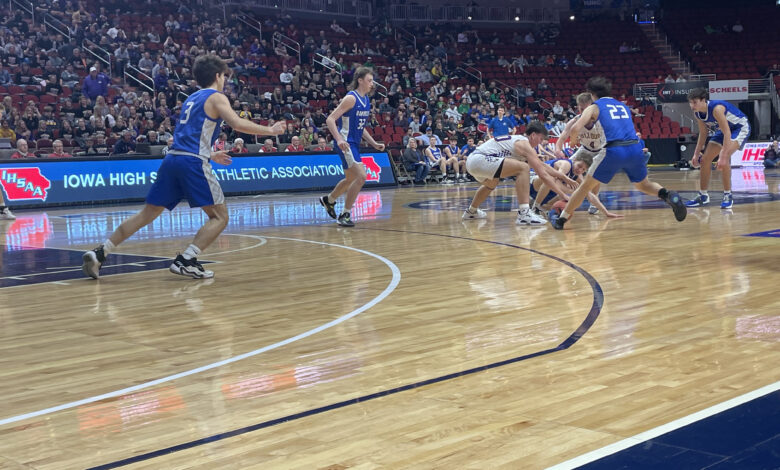 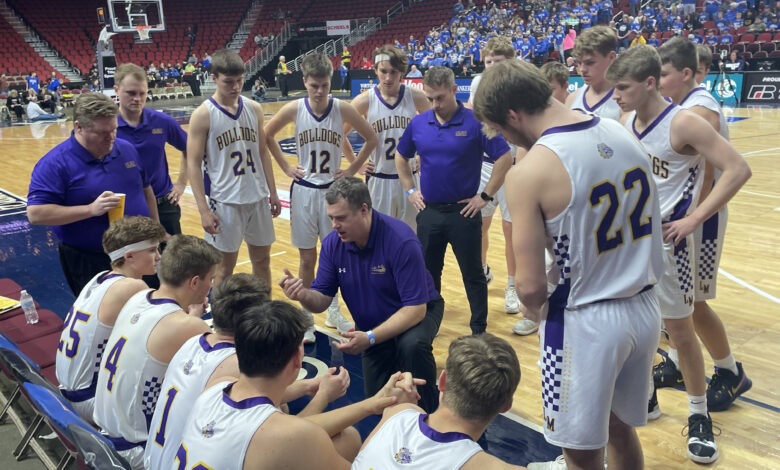 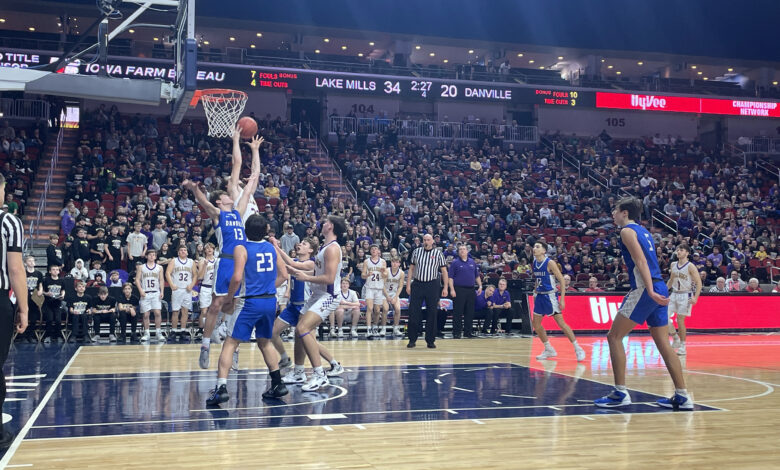 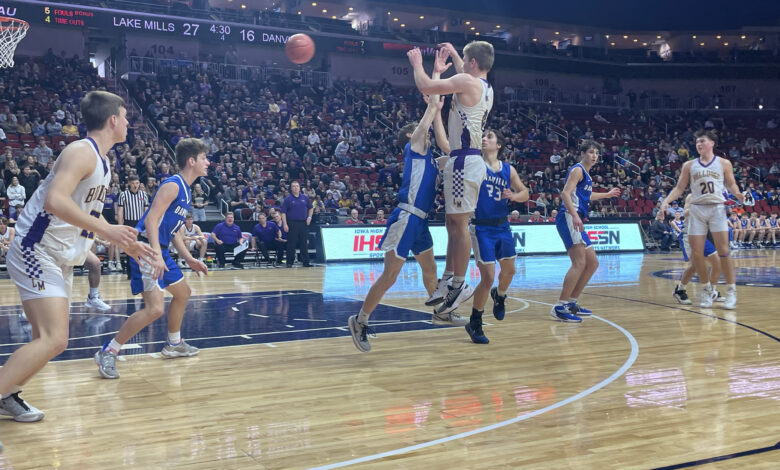 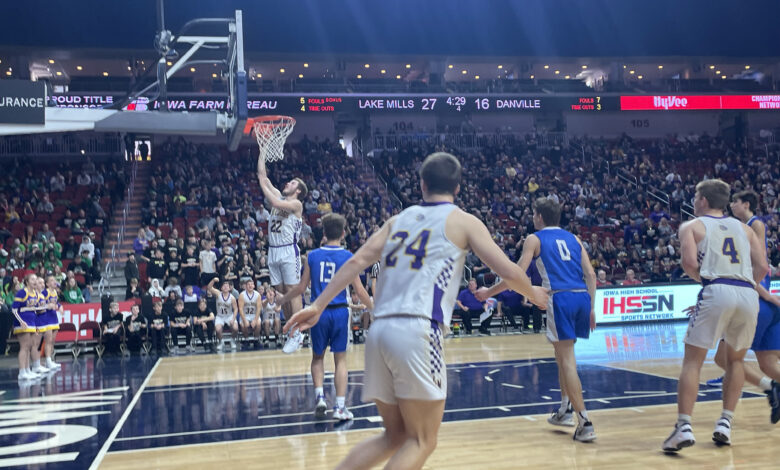 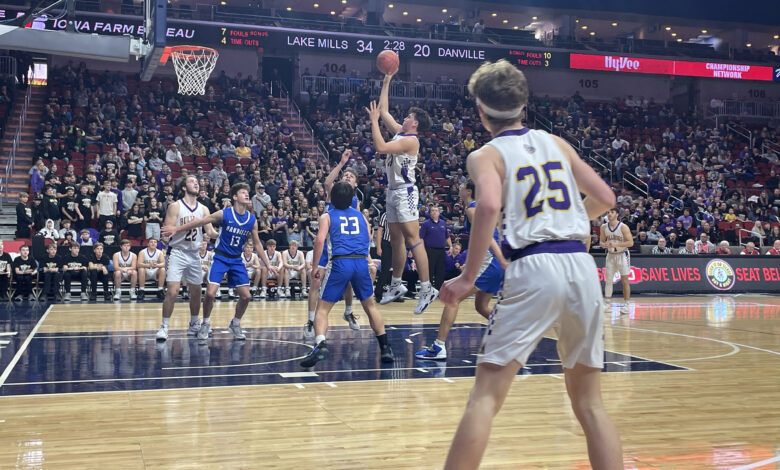 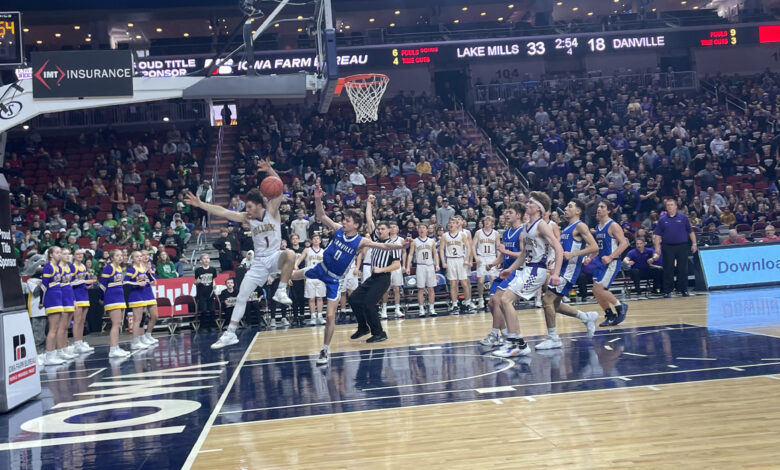 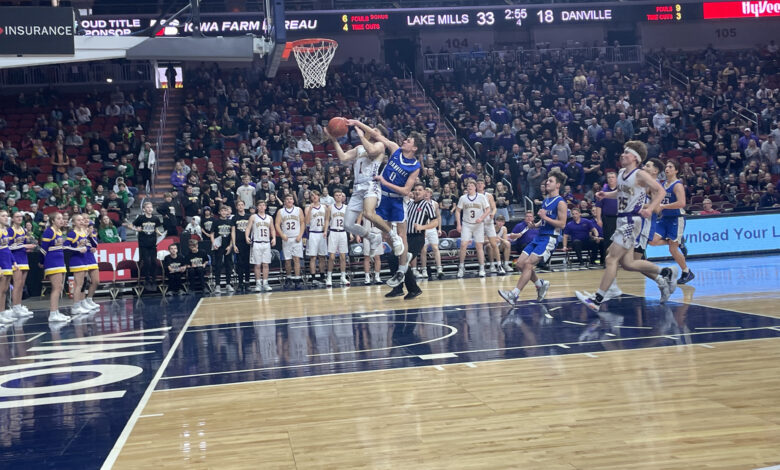 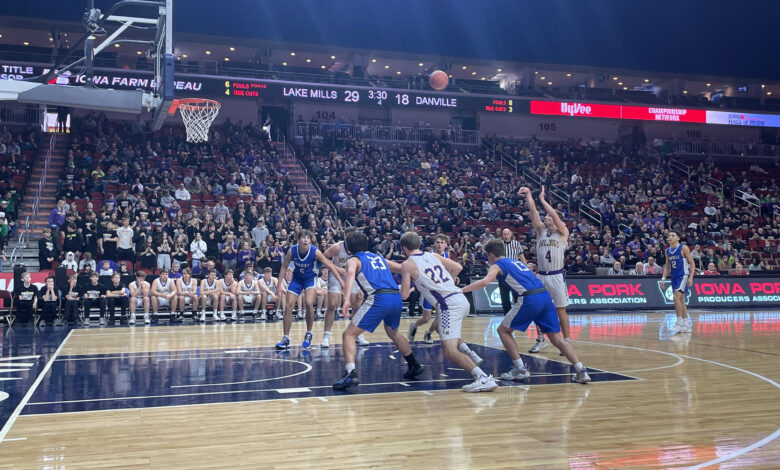 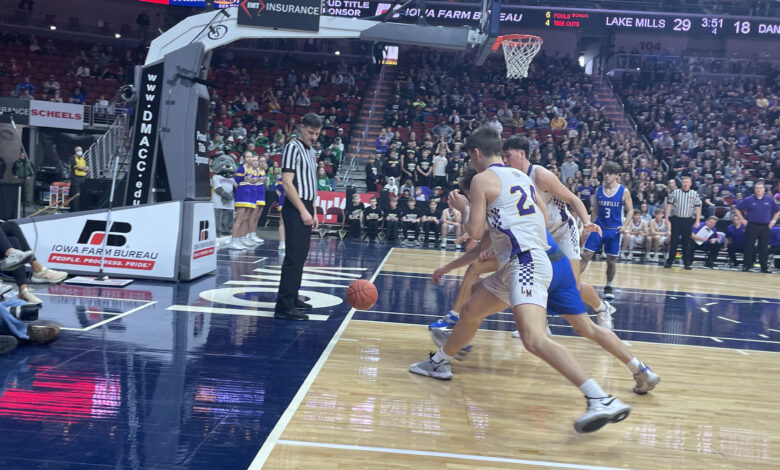 DES MOINES, Iowa – For the first time in school history, #4 Lake Mills will leave Wells Fargo Arena to prepare for another game. The Bulldogs raced out to a third-quarter lead and held on to beat #5 Danville in the state quarterfinals Monday morning, 39-22.

You could tell not only was it Monday morning, but both Danville and Lake Mills hadn’t played for a week. It was a slow start seeing just nine total points in the first quarter. Danville’s only field goal came with just 27 seconds left in the first quarter. Though those weren’t the only factors, both teams pride themselves on defense, which helped a slow start. Lake Mills shot 2-7 from the floor, while Danville shot 1-11, and the Bulldogs had a 7-2 lead after the first.

The second quarter was more of the same; though Danville was able to catch up, they made a free throw with 2.2 to tie the game at 11-11. Bennett Berger had a look from half court as time expired that went just long, hitting off the rim.

The third quarter is where the Bulldogs’ offense finally caught up to is good defensive effort. Lake Mills started the quarter with a Wyatt Helming two-point basket and went on a 10-1 run to open the quarter; they closed the quarter scoring four more points and leading 25-16, heading to the fourth quarter. Danville frustrated Helming, keying in on him defensively, “We knew it would be physical. We knew they were good on defense.” Helming said he found out quickly just how scrappy the Bears were, “They got a few steals on me, and I turned the ball over, I just needed to settle down and be strong with it.”

In the fourth, Lake Mills scored just four points in the first four minutes, but playing with a lead, they held Danville to just two points in that same period. As they did in the first half, Lake Mills held Danville just to 11 points in the second half and overcame a low-scoring day to survive and advance. With the game in hand, Lake Mills went to their bench, and senior Bennett Berger – who has felt the disappointment of the past two years – flapped his arms up and down to fire up the crowd as he exited, “The last couple of years, that feeling that I’ve had leaving this arena on Monday, that just sucked.” He also said, “I told someone that substate was the best feeling, but I lied; winning one down here is the best feeling in the world.”

The two teams combined for 1-28 from behind the arch, with Lake Mills making the lone three-point basket, while Danville went 0-17. Lake Mills shot 60 percent from the floor in the second half, while the Bears shot 21 percent. “ (defense) was the key to the game,” said Lake Mills coach Kyle Menke. He continued by saying, “second half, one of the big keys was that  we got the ball inside on dribble penetration.”

The most effective player for the Bulldogs was senior Seth Hermanson. “Well, when you have a good point guard like Bennett, you can always tell when he’s going to pass it; we just have that connection to always to know.”  Hermanson scored ten total points and grabbed five rebounds. He was 4-6 from the floor and made both of the free throws he shot in 20 mins of basketball. Along with Helming, he had to absorb the physical game, “You just (got to) put your head down and keep going – try your hardest.”

Lake Mills will now take on #1 Grand View Christian, who blew a double-digit lead to #8 Bellevue but won with a free throw in overtime. The Thunder are led by Manny Hammonds, who averages 23.9 points per game, while Josh Baucum averages 19. They average 83 points per game as a team, giving up just 45.6. Daniel Tobiloba towers over the court at 6-11 and averages 14.5 rebounds per game, where most of his points come from. The Thunder are 25-0 and are making their sixth appearance at state since 2016. They won three straight state championships from 2017-19, missed the tournament in 2020, and fell short last year. Head coach Dave Stubbs was pleased his team came away with the win but said they didn’t play like the 1-seed.

Bulldogs ride defense to the 1A State Semifinals