For several months, local residents reported a large dog running loose in a wooded area in the southeast part of Mason City. She was eating out of people’s trash cans and did not appear to belong to anyone. Mason City Animal Control Officer Dave Houser had attempted, along with others, to capture her, but to no avail. Every time someone tried to approach her, she bolted off.

Officer Houser was committed to rescuing this dog and after reviewing trail cam footage from the DNR, Houser was able to determine that the dog had been sleeping inside a large concrete culvert located within the woods. Officer Houser set up a large “live-trap” in the area and after only 2 days, she was captured. The dog, a large female silver lab, was transported to the Mason City Stray Animal Shelter (co-located and managed by the Humane Society of North Iowa).

Because she had been living on her own for so long in the wild, scavenging for food and with no human contact, shelter staff worried she may have reverted into some instinctive survival behaviors that could make it difficult to handle and care for her in a shelter environment.

Almost immediately, the dog, (named Amelia by shelter staff), dismissed these concerns as all she wanted to do was snuggle with staff, give kisses and enjoy stuffed toys.

“Considering what she’s been though, it was quite surprising to see how friendly and loving she is with everyone,” stated Houser. “I’ll never know how she ended up living in the woods alone for so long eating garbage; I’m just grateful to have caught her and to know that she now has the opportunity for a much better life,” concluded Houser. 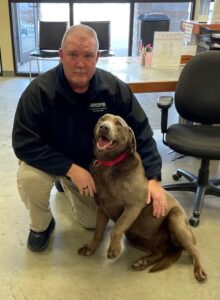 Staff at the Mason City Stray Animal Shelter searched through the Missing Animal Reports to see if anyone was missing a dog that matched Amelia’s description, but came up empty-handed. Amelia was placed on a 7 day hold to give an owner the chance to reclaim her, but no one did.

“Amelia had to have been someone’s pet, but no one came for her,” said Sybil Soukup, Executive Director of the Humane Society of North Iowa. “We are eager to find her a new forever home where she will be loved and kept safe and never have to eat garbage again.”

Amelia has received a thorough veterinarian exam and it was discovered that she has a leg injury that will need surgical repair in the near future. Donations are being requested to help pay for Amelia’s leg surgery. Estimated cost is in the $3000-$5000 range. Information about how to donate can be found online: www.hsni.org 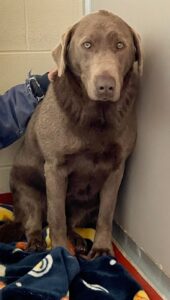 The Humane Society of North Iowa is now caring for Amelia and are amazed at how sweet and loveable she is. “Amelia shows us the resilient nature of dogs and their ability to overcome trauma and be able to trust again,” said Soukup. The Humane Society of North Iowa also acknowledges the commitment and efforts of Mason City Animal Control Officer Dave Houser. “Mason City is fortunate to have an Animal Control Officer who is truly compassionate and cares about animals”.

For more information about Amelia or the adoption process, please contact the Humane Society of North Iowa by email: hsni@hsni.org or phone: 641-423-6241

NIACC Part of Over $5.5 Billion Contribution To Iowa’s Economy