Week five of the 2022 legislative session was busy and satisfying for me. I was able to run several bills through committee and they passed.

SSB 3089 is fairly simple. In 2016 we passed “Restrictions Regarding Companies Boycotting Israel.” Since then we have found a company we invest in that has a subsidiary company (Ben & Jerry’s ice cream) that will not allow sales in territories it believes Israel should not control. What this bill does is include the parent company (in this case Unilever) with the subsidiary in being barred from state investing.

I also ran SF 2156, which would require healthcare providers to report “adverse events” after a vaccination. I have heard many reports of injuries not being reported to the Vaccine Adverse Event Reporting System. Surveys done years ago showed that far less than 10 percent of vaccine injuries are reported to VAERS, even though federal law requires it. This bill puts the federal language into Iowa law and adds a penalty of $1000 for each time a provider refuses to report an adverse event. If we truly want to know the safety of any vaccine, we must have all adverse events reported to VAERS, even if it is not certain if it is related to the vaccine. VAERS has protocol to follow and will decide if an injury was or was not related to a vaccination.

Senate Joint Resolution (SJR) 2002 is a call for an Article V convention of states to amend the U.S. Constitution to impose fiscal restraints, limit the power and jurisdiction of the federal government, and impose term limits on Congress and unelected federal bureaucrats. This resolution has ignited much debate over whether it can be kept from being a “runaway” convention that could fundamentally alter our Constitution. The way Article V is written, a dissenting vote from 13 of the 50 states would stop ratification. Each state has 1 vote. I maintain that anytime Iowa can get input equal to that of California and New York, we should participate. 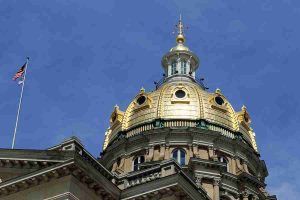 The Senate continued to work at simplifying Iowa’s tax code and reducing personal and corporate income tax. We desire to reduce the number of tax credits and lower the tax rate, making Iowa a welcoming place for all businesses, while being fair to the established businesses already here.

I mentioned last week how we plan to move to just one tax rate (3.6%) for all personal income taxes. We are also trying to simplify the sales tax system. Consolidating over one thousand jurisdictions into a unified sales tax that will have  just one sales tax rate. This means the Local Option Sales Tax will become part of the sales tax rate. The one cent will still be remitted back to cities and counties.

My next townhall meetings will be on March 4, 10 AM at Ole’s Office Space, Lake Mills; 12:30 PM at Heritage Town Center, Buffalo Center; 2:30 PM at Waldorf University, Forest City

March 5 I will be in Estherville at the Regional Wellness Center, the time is to be determined.

One of the things I enjoy as a senator is giving folks a tour of the Capitol and explaining the law-making process. If you are ever in Des Moines during the session, please come by the Capitol and say hi! I want citizens to understand the process and know how to influence state government