Every winter during the early part of January, Iowa participates in the national Bald Eagle Midwinter Survey. Over 1,600 miles of rivers and lakeshores are surveyed and all of the bald eagles that are seen are counted. Between 2011 and 2021, an average of 3,104 bald eagles have been counted annually during this survey. In 2022, a whopping 5,404 adult and immature eagles were counted along 1,626 miles of water! 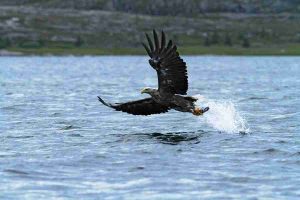 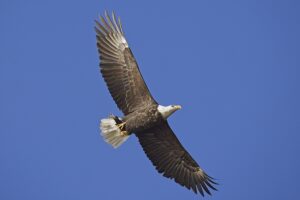 While counting, surveyors distinguish between adult eagles and immature eagles and the ratio of young birds in the count is an important metric. Since 1991, the number of immatures has made up around 30% of the count and if this number decreased consistently over several years in a row, it would raise concerns about the population’s reproductive success rate. In 2022, 1,852 immatures were counted making them about 34% of the count.

But where did they come from and why are they here?

Well, that’s a little tricky to figure out since eagles don’t generally communicate in English but we have some ideas. We know that most eagles only move as far as they have to in the winter to find food and no further. During mild winters they will stick close to their nest. The eagle nesting season in Iowa kicks off in late February, so it doesn’t make sense to stray too far.

So, it is safe to assume that many of these winter eagles are resident birds that also nest in Iowa and just move to wherever they can find open water. These resident birds are likely joined by birds drifting down from the north, primarily Minnesota and Wisconsin. These two states hold large populations of nesting eagles and some of them likely wander down to Iowa particularly when it gets this cold! 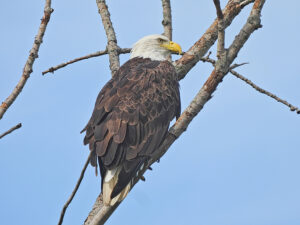 Why are there so many eagles that are sampling Iowa’s delights this year? It’s hard to say but it is probably related to how cold – and frozen – January was. Much of the water to the north is frozen and parts of the southern Des Moines and Mississippi rivers offer some of the best open water. Our count may also be increased by how concentrated birds are around small areas of open water, making them easier to count.