Wrestling fans from around the region packed into the Boman Fine Arts Center Wednesday night to watch the Warriors take on St. Ambrose University.

An evenly matched dual, both teams had at least one open weight, St. Ambrose had two, allowing for seven matches to decide a winner.

The Fighting Bees got out to a hot start when Michael Chagnon won a 14-6 major decision over Freddy Mereno. The 4-0 lead got extended to 10 when Waldorf forfeited to highly ranked Matt Robertson of St. Ambrose.

Waldorf finally got on the board with a win at 141, when Tyler Okada won a decision over Riley Woods, 9-4. But shortly after, the St. Ambrose lead rose again when Diego Machado of St. Ambrose pinned Robert Ornelas of Waldorf in 4:55, giving the Bees a 16-3 lead.

Waldorf wouldn’t go down quickly. They won back-to-back matches at 157 when Jalon Strong beat Slade Dias, and at 165, Mahlik ball received a forfeit, which pulled the Warriors to within four points, 16-12.

St. Ambrose secured the win with back-to-back falls at 174 with Jayden Terronez and at 184 with Dylan Meiners. At 197, Waldorf picked up a forfeit and six more points to make the dual 28-18.

One of the most electric matches of the night came in the final bout at 285. Waldorf had to bump Izaiah Leramia, who usually wrestles at 197, to the heavy class to face a true heavyweight in St. Ambrose’s Cody Short. The two went back and forth both with opportunities to score the win, but it was Waldorf’s Leramia who came away with the pin as the Boman erupted. 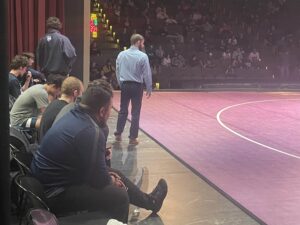 The Dual didn’t go in Waldorf’s favor, but coach Ryan Dickinson was happy with the environment.

Waldorf is a young team and Dickinson hopes they can keep building on there current momentum.

Though Waldorf still has time to continue to focus on this year. The Warriors will host one final dual of the year when Northwestern comes to the Hanson Fieldhouse on February 2nd, then they close the year with the Dave Edmond open on February 5th and the conference tournament on February 19th. If the Warriors qualify any wrestlers for nationals that will take place on March 4th and 5th. Coach Dickinson says the team needs better performances as the year closes.

Hancock Board Votes to Resolve Dam Problem in Drainage