When Will Finley took over as the head coach for the Waldorf University football team, he doubled down on a commitment to winning with southern Minnesota and northern Iowa players. This trend was started by his predecessor, Josh Littrell. And as signing day approaches once again, Waldorf is set to bring in the future local athletes who are expected to take the program to new heights.

There was no way to sugarcoat it when Littrell took over before the 2017-2018 season; the program was in shambles. From 2007 through 2013, the program went 10-66, winning no more than two games in three of those seasons and winning only one game in the other four. The 2009-10 team went 1-10, beating only Trinity International University, who finished the season 0-11. That Waldorf team was made up of only 53 players, and only nine of them were Iowans. Two were former local preps, Forest City’s Alex Grunhovd and Belmond’s Eric Janssen.

Compare that to the last five years. Waldorf has no losing seasons, and the two coaches have compiled a 33-17 overall record. This past year, of the nearly 100 rostered players, 38 of them came from Iowa alone, not even counting the southern Minnesota players. Those 38 Iowans included 11 players that attended KIOW coverage schools.

So has Waldorf found the secret sauce? It’s a win-win for Waldorf and local high school athletes. Waldorf is more successful when they recruit northern Iowa and southern Minnesota. Those athletes get a chance to become stars near their home turf with friends and family in the stands and throw tailgating parties. Parties that will start roughly three hours before kickoff and continue for hours following games at Bolstoff Field. The video below is of a home game last season when the Warriors arrived at the stadium, fans do this for every home game, and the team has named it the Warrior Walk.

Fan line up to greet the team as they head to the locker room to prepare for that day’s battle. With the grills warming up to cook lunch and the cold ones on ice, it’s an experience you don’t get many other places on gameday in Forest City.

Now you think the home games are impressive, wait till you see the purple and black travel on the road. The pictures here are of just one road game this past season. Waldorf almost doubled the home fans, including taking over one of the parking lots for their tailgate parties. 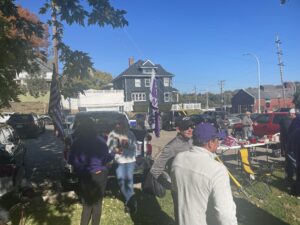 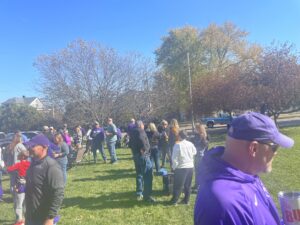 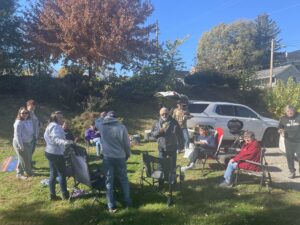 Not known to be done by many other schools in the NAIA, the Waldorf football team highlights their players, coaches, and successes with a weekly hour-long radio show during the season. The show hosted by Zarren Egesdal includes Waldorf head coach Will Finley talking about the previous week’s game and looking ahead to the upcoming game. The past week’s offensive and defensive MVPs also join the show to give their thoughts, and Zarren Egesdal highlights their paths leading to Waldorf.

Now, it would be naïve not to mention Waldorf needs to continue recruiting other states and bringing players to Forest City. They have had plenty of success stories with out-of-state players, including former quarterback Hilton Bo Joseph, who became a two-time NAIA All-American at Waldorf from Miami, Florida. But Waldorf’s first-ever NAIA First Team All-American was an under-recruited six-foot-six kicker from West Burlington, Iowa. Slater Gifford kicked his way onto the first team in 2020.

Waldorf is set to unveil their new crop of recruits on February 3rd live on KIOW radio during the Signing Day Social. The social will air live at 7:00 PM on mix 107.3 FM and can be attended live at The Paddlers  Tap located in downtown Forest City – something you won’t find at other NAIA schools.