Ziyannah Conner has started the season by putting up stats among the best in the country, and now she’s rewarded for those efforts. Conner was selected by the NJCAA as the Division II  national women’s basketball player of the week. 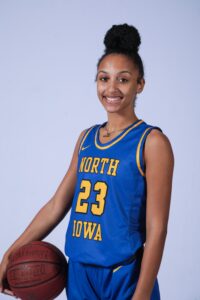 Conner scored 24 points with nine rebounds, six steals, and two blocked shots in a 64-61 loss to Southeastern. She also scored 20 points, including an 8 for eight performance from the field, with nine rebounds and five steals.

Conner ranks 21st in NJCAA Division II in scoring with a 19.0 per game average. She ranks fifth nationally in field-goal percentage (67.2 percent).

According to the school, Conner is the first NIACC women’s basketball player to earn the NJCAA Division II weekly honor since Kourtney Manning won the award for the week of Feb. 8-14 in the 2021 season.

NIACC (6-1 overall) returns to action Wednesday in an ICCAC contest at No. 9 Iowa Western. Game time is slated for 5:30 p.m.

"This Week at Waldorf" with President Bob Alsop/Thursday December 9th