This weekend, Rep. Randy Feenstra (IA-04) joined Rep. Tony Gonzales (TX-23) to visit the southern border, as the humanitarian and national security crisis the Biden-Harris administration created has shown no signs of improvement.

The two received an aerial tour of the Big Bend, a remote sector of the border where apprehensions have reached unprecedented levels. They also visited the Presidio, Texas port of entry along the U.S.-Mexico border, where Feenstra and Gonzales met with law enforcement officers who are on the front lines ensuring drugs, weapons, and other contraband does not make it across the border. Both Big Bend and Presidio are popular locations for migrants who have criminal records trying to smuggle drugs or weapons into the U.S. 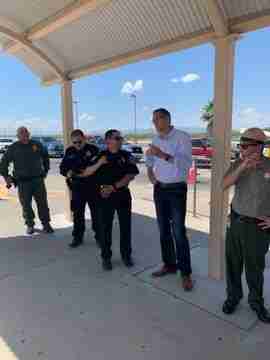 “It is completely inexcusable that Vice President Harris, the administration’s ‘border czar,’ has yet to see the border crisis for herself. After having the opportunity to see what is taking place firsthand, it is clear the Biden-Harris administration must take this crisis more seriously. With illegal border crossings at a 20 year high and fentanyl seizures up, the Biden administration needs to do more to secure our border. I am thankful for all law enforcement personnel who are working around the clock to prevent contraband from entering our country and helping keep our communities safe,” said Rep. Feenstra.