Congressman Steve King releases this staff memo as a service to the constituents of Iowa’s 4th Congressional District. The memo lays out important information concerning the recent misquote of Congressman Steve King by the New York Times. King encourages interested parties to consider this important information as they form their opinions on the matter.:

Allegation: In a quote attributed to him by the New York Times, King is alleged to have wondered when the phrases “White nationalist, white supremacist, Western Civilization” became offensive, suggesting to some that he does not view the first two terms as disparaging.

King’s response: King has consistently disputed this interpretation, maintaining that he was simply trying to ask when the phrase “Western Civilization” had gained a pejorative connotation, an assertion that is supported by the remaining section of the Times’ quote.

King says the conversation in which this quote is alleged to happen was about the left’s use of weaponized language: “we discussed the changing use of language in political discourse. We discussed the worn out label “racist” and my observation that other slanderous labels have been increasingly assigned to Conservatives by the Left, who injected into our current political dialog such terms as Nazi, Fascist, ‘White Nationalist, White Supremacist,— Western Civilization, how did THAT language become offensive? Why did I sit in classes teaching me about the merits of our history and our civilization?’…just to watch Western Civilization become a derogatory term in political discourse today.”

Notably, none of the context of the discussion which spawned the “quote” was included in the New York Times story.This context would have added greater clarity to King’s reported remarks, revealing that his intention was to question the inclusion of “WESTERN CIVILIZATION” alone as a pejorative.

The “quote”: “White Nationalist, white Supremacist, Western civilization— how did THAT language become offensive? Why did I sit in classes teaching me about the merits of our history and our civilization?”

NOBODY IN AMERICA EVER SAT IN A CLASS about the merits of White Nationalism or White Supremacism. The incorrect interpretation that has been given to this “quote” refutes itself based on the “quoted” sentence’s own construction.

“He made a mistake, Steve King. He agreed to give an interview on national immigration policy to the New York Times. That’s not a good faith interview request. They’re only asking you, and he should know this, they’re only asking you to stitch you up. To talk to you for three hours and get you to use one phrase in there that they can lift out and kill you with.”

However, this CSM interview occurred prior to the release of the Times article, and shows how King had been making a variation of this argument at the approximate time he spoke to the Times reporter. In this case, though, the CSM actually published it in the context in which it was made. It is clear that King was making a similar argument to the Times. 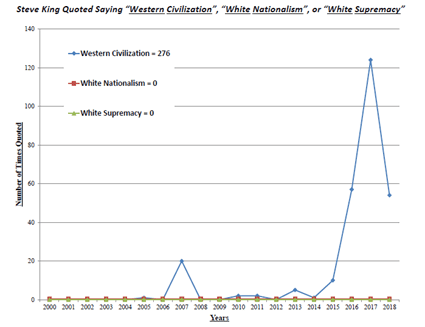 Based on this data, it appears unlikely that King spontaneously used the phrases “white nationalist” and “white supremacist” in his discussion with the Times reporter, as they were never common elements of his speech. It suggests that King was repeating terms fed to him by the Times.

The article contains the following passage, likely written prior to the King interview: “Elected to Congress in 2002, Mr. King attracted the attention of hate-watch groups like the Anti-Defamation League as he spoke increasingly about preserving ‘Western Culture’ or “Western Civilization.’ The groups consider thosebuzzwords that signal support to white nationalists, along with an obsession with birthrates and abortion rates among different ethnic groups.”

In his statement, King was trying to put into words his entirely accurate observation that the term “white nationalist” has been weaponized by the left against conservatives, and that its use in this form has markedly increased over the past several years.

King’s point about the increased frequency with which the weaponized term “white nationalist” has been injected into modern political dialogue is evident when data from a Lexis-Nexis News Database search is analyzed.

As King told Price, it has only been in the last “year or two or three” that the pejorative phrase “white nationalist” has gained purchase in the political debate as a weaponized term.

No one believes the Congressional Record was acting with animus. But their error did reveal how either a similar error, or an intentional misplacement of punctuation, could have led to a botched quote in the times.Remember, King has always disputed the quote as it was portrayed in the Times.

King is insisting upon a correction in the Congressional Record so that it reflects the quote as he intentionally delivered it on the House floor. King’s correction reveals that he was attempting to separate “Western Civilization” from the other two pejorative terms.

New York Times/Congressional record mistaken quote: “White Nationalist, White Supremacist, Western Civilization—how did THAT language become offensive? Why did I sit in classes teaching me about the merits of our history and our civilization?’”

Corrected quote: “White Nationalist, White Supremacist,— Western Civilization, how did THAT language become offensive? Why did I sit in classes teaching me about the merits of our history and our civilization?’”

One misplaced hyphen in the NY Times story gave birth to a meritless controversy by falsely implying that Congressman King did not differentiate between the three phrases.

Conclusion: Congressman King was railroaded over a false quote.  To believe the version of events relied upon by Kevin McCarthy to strip King of committee assignments, one must believe that an unreasonable but “sensational” interpretation, for which no evidence exists, is more likely to be accurate than a reasonable, “noncontroversial” interpretation which is internally supported by context clues and externally supported by data and other contemporaneous, published accounts. One must also believe that The New York Times, a hostile, liberal paper which has had other articles about Congressman Steve King written by the same author thoroughly debunked as “completely bogus,” set aside its animus in this particular case.

Grassley on the Green New Deal