Anyone looking for quiet can find it here – the only sounds are birds and insects – no phones, no cars, no nothing.

“This is a bird watchers and nature lovers’ paradise,” said Jeff Glaw, wildlife management biologist for the Iowa Department of Natural Resources (DNR). “With the habitat and food available, it should be a mecca for hunters, too.”

Bird watchers are coming thanks to the Soap Creek Bird Conservation Area. Hunters are another story.

While the area has excellent populations of deer, turkey, squirrels and other game, access is somewhat limited. Of the two, Eldon has better access and that is reflected in hunter numbers. During bow season, the Eldon parking lots will fill with mostly out of state hunters during the rut. But that can be deceiving – full parking lots could mean 12 hunters – or about 100 acres per hunter. Not exactly shoulder to shoulder. 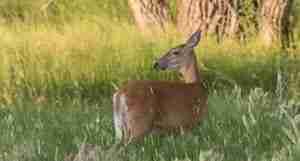 The Eldon Wildlife Area ironically began as a quail study area in 1942-43 but over time, trees came in changing the area from brushy to forest. This new habitat began attracting neotropical birds, deer, squirrels, turkey, bobcats, and more. Glaw has been working with district forester Ray Lehn to enhance the benefits by improving the timber stands.

Lehn began a forest stewardship plan by walking the entire 1,290-acres, grouping the trees into 88 stands and prioritizing the stands according to the goal of managing for oaks. The plan called for removing some of the understory and thinning the canopy to allow sunlight to hit the forest floor, which is important for oak regeneration. The understory work has been going on for about the last five years.

“We’re making great progress getting all the high priority stands ready for harvest,” Lehn said.  However, selective harvest is a small part of the overall forest stewardship plan.

While some trees are scheduled to come out, there are places where trees are going in.

“Fragmentation of timber is detrimental to interior forest bird species, causing problems like cowbird parasitism,” Glaw said. They added more than 100 trees this past year in certain areas to fill in the gaps and are replanting old crop fields with oaks, the later project was possible because of an Arbor Day grant.

Not all of the management focus is on timbered areas, however. Glaw is also working on a quail habitat component.

Quail prefer disturbed areas with bare ground plus shrubs, like wild plum, nearby for cover. The bare ground will be provided by dove hunting plots.

Across the river, the Fox Hills Wildlife Area has fewer access points and fewer hunters. It’s nearly 1,350 acres is divided into two sections separated by a half mile. The west section has a small lake that most likely does not receive much fishing pressure.

Fox Hills is on the same bluff as Garrison Rock Resource Management Unit which is managed by the Wapello County Conservation Board.

Board director Kurt Baker said the 302-acre Garrison Rock Unit was probably a high value site due to its location overlooking the Des Moines River.

Garrison Rock is home to a pioneer cemetery, a high quality oak hickory timber, hayfields that are being converted back to native prairie, more than 1-1/2 miles of hikable Chief Wapello Trail, and Horse Thief Cave.

Local folklore says Jessie James and his gang hid in Horse Thief Cave after stealing, you guessed it, horses. As for the story’s authenticity, Baker is skeptical. He said a lot of communities have similar stories but it makes for good campfire fodder. The cave collapsed 50-plus years ago and is now a series of rock depressions. 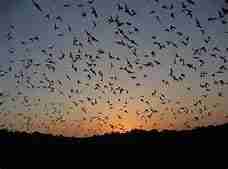 Eldon, Fox Hills and Garrison Rock are home to all the common bat species in Iowa, plus the federally endangered Indiana bat. “It’s a great area for bats to form summer maternal colonies under the bark of living or dead trees right here along the river,” Glaw said.

An Iowa DNR survey crew found 30 species of dragonflies and damselflies using a small pond on the west side of the Eldon area in 2012.

Little ladies tresses was identified last fall and while this is fairly common occurrence in Missouri, it is the first time this orchid has been documented in Iowa. 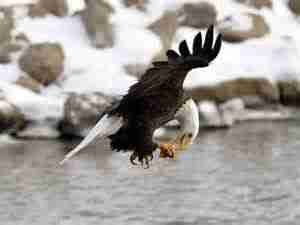 The Des Moines River section between the wildlife areas stays ice-free in the winter which attracts thousands of geese and hundreds of trumpeter swans. It’s a great spot to watch bald eagles as they survey the flocks for a potential meal. Some eagles have taken up residence year round

Nothing goes to waste

Visitors will notice dead trees in the tree canopy. Some are ash trees that died at the mouths of the emerald ash borer. Others were intentionally girdled and left to stand.

Dead trees open the canopy that allows sunlight to reach the forest floor, provide resources and create habitat used by wildlife, and woodpeckers in particular. The area is home to the three species most common to Iowa – redhead, pileated and downy – and to lesser known species like red bellied woodpecker and hairy woodpecker.